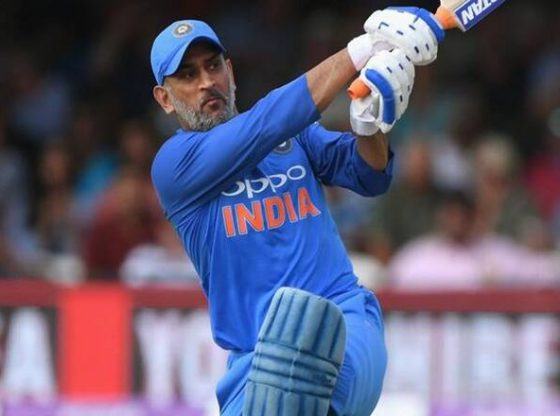 In a match completely dominated by the wicket-keepers, Dhoni overshadowed Kumar Sangakkara’s unbeaten century to help India register a famous win. Sangakkara’s 138* helped Sri Lanka post an imposing 298/4. However, Dhoni went a step ahead as his 145-ball unbeaten 183, consisting of 15 fours and 10 sixes, took India home with almost four overs to spare at the Sawai Mansingh Stadium in Jaipur.

In his fourth ODI, the stylish wicket-keeper batsman, who used to sport long hair back then, announced himself on the international stage by playing an explosive 148-run knock against arch-rivals Pakistan. His 123-ball knock — studded with 15 boundaries and four sixes — helped India reach 356/9 in their 50 overs. Pakistan put in a brave show but they ultimately fell short by 58 runs.

“Dhoni finishes off in style. A magnificent strike into the crowd! India lift the World Cup after 28 years!” These words from Ravi Shastri in the commentary box will always reverberate in the minds of billions of Indians till eternity. Though all-rounder Yuvraj Singh was the linchpin of India’s success in the 2011 World Cup, it was Dhoni who rose to the occasion during the final at the Wankhede Stadium in Mumbai. Chasing Sri Lanka’s 275 for victory, India had the worst possible start, losing Virender Sehwag off the second ball and Sachin Tendulkar when the score was just 32. Dhoni, who was not in the best of form in the World Cup, surprised everyone by promoting himself ahead of in-form Yuvraj. But Gautam Gambhir and skipper Dhoni steadied the ship with a 109-run fourth-wicket partnership and then his unbeaten 54-run partnership with Yuvraj (21) helped India clinch a six-wicket win as Dhoni wrapped it up with a straight six off pacer Nuwan Kulasekara.

Chasing Australia’s 270 at Adelaide, Gautam Gambhir kept India in the hunt with a majestic 92. However, a steady bowling performance by the Aussies kept the game in the balance. And it all came down to the 13 runs required from the final over, with Clint McKay taking on the Indian skipper. Dhoni, who was until then struggling to find the middle of the bat as he crawled to 33 from 55 balls before the final over, sent the high-pressure third delivery for a monumental 112-metre long maximum, one of the biggest sixes ever hit at the venue, and then secured the win with two balls to spare. Dhoni remained not out at 48 and reminded everyone that no one in the sport can beat him when it comes to keeping cool and performing under immense pressure.